Due to the acquisition closing occurring at year-end, OFG’s 4Q19 and 2019 income statements and credit quality metrics reflect pre-acquisition operations as well as acquisition related expenses, while the December 31, 2019 balance sheet and capital metrics reflect the newly acquired assets and liabilities.

José Rafael Fernández, President, Chief Executive Officer, and Vice Chairman of the Board, said: “We ended 2019 on a high note, closing the Scotiabank acquisition at year-end as originally anticipated. We welcome our new team members and clients in Puerto Rico and U.S. Virgin Islands. We are committed to providing excellent career opportunities to our new employees and excellent service, products, and technology to our new clients. We’re excited about the prospects for future growth.

“I also want to thank all our staff for their exceptional work, some despite their own difficult personal circumstances, in assisting earthquake evacuees. As early responders on the ground in affected areas, Oriental teams helped organized shelters and relief centers. In coordination and collaboration with several of our clients, we provided more than 4,000 meals, bottled water, batteries, electric fans and other essentials. We also arranged access to teams of doctors and structural engineers. The quick response would not have been possible without our compassionate staff and clients. We are extremely proud of our commitment to the communities we serve.

“Turning back to business, 4Q19 was a very busy quarter, closing on the acquisition while continuing to build our existing business. Operationally, we had a strong quarter. We effectively managed the transition to slightly lower yields in the commercial loan portfolio, reflecting FRB rate cuts, with our pro-active effort to reduce high cost wholesale funding. Going forward, our funding mix will improve even further with our larger core deposit base.

“We are well positioned for 2020. The acquisition enabled us to more effectively use our excess capital and end 2019 with a record $6.6 billion in loans and a record $7.7 billion in deposits, which increases our ability to generate future growth. We are moving fast, starting the year focused on integration and loan production, and look forward to reporting our progress in the quarters ahead.”

The final impact of CECL will depend on the circumstances at the date of adoption such as asset quality, macro-economic conditions and economic perspective, and continued refinement in 1Q20.

OFG’s Financial Supplement, with full financial tables for the quarter ended December 31, 2019, and 4Q19 Conference Call Presentation, can be found on the Webcasts, Presentations & Other Files page, on OFG’s Investor Relations website at www.ofgbancorp.com.

In addition to our financial information presented in accordance with GAAP, management uses certain “non-GAAP financial measures” within the meaning of the SEC Regulation G, to clarify and enhance understanding of past performance and prospects for the future. See Tables 9-1, 9-2 and 10 in OFG’s above-mentioned Financial Supplement for reconciliation of GAAP to non-GAAP Measures and Calculations. OFG has attached to this news release Table 10: “Reconciliation of GAAP to Non-GAAP with adjustments to exclude the impact of significant events” for the year ended December 31, 2019.

Factors that might cause such a difference include, but are not limited to (i) the rate of growth in the economy and employment levels, as well as general business and economic conditions; (ii) changes in interest rates, as well as the magnitude of such changes; (iii) changes to the financial condition of the government of Puerto Rico; (iv) amendments to the fiscal plan approved by the Financial Oversight and Management Board of Puerto Rico; (v) determinations in the court-supervised debt-restructuring process under Title III of PROMESA for the Puerto Rico government and all of its agencies, including some of its public corporations; (vi) the amount of government, private and philanthropic financial assistance for the reconstruction of Puerto Rico’s critical infrastructure, which suffered catastrophic damages caused by hurricane Maria; (vii) the pace and magnitude of Puerto Rico’s economic recovery; (viii) the potential impact of damages from future hurricanes and natural disasters in Puerto Rico; (ix) the fiscal and monetary policies of the federal government and its agencies; (x) changes in federal bank regulatory and supervisory policies, including required levels of capital; (xi) the relative strength or weakness of the commercial and consumer credit sectors and the real estate market in Puerto Rico; (xii) the performance of the stock and bond markets; (xiii) competition in the financial services industry; and (xiv) possible legislative, tax or regulatory changes.

For a discussion of such factors and certain risks and uncertainties to which OFG is subject, see OFG’s annual report on Form 10-K for the year ended December 31, 2018, as well as its other filings with the U.S. Securities and Exchange Commission. Other than to the extent required by applicable law, including the requirements of applicable securities laws, OFG assumes no obligation to update any forward-looking statements to reflect occurrences or unanticipated events or circumstances after the date of such statements.

OFG Bancorp (NYSE: OFG)
Table 10: Reconciliation of GAAP to Non-GAAP with adjustments to exclude the impact of significant events.

The Company prepared its Consolidated Financial Statement using accounting principles generally accepted in the U.S. (“U.S. GAAP” or the “reported basis”). In addition to analyzing the Company’s results on the reported basis, management monitors the “Adjusted net income” of the Company and excludes the impact of certain transactions on the results of its
operations. Management believes that “Adjusted net income” provides meaningful information to investors about the underlying performance of the Company’s ongoing operations.

The table below describes adjustments to net income for the year ended December 31, 2019 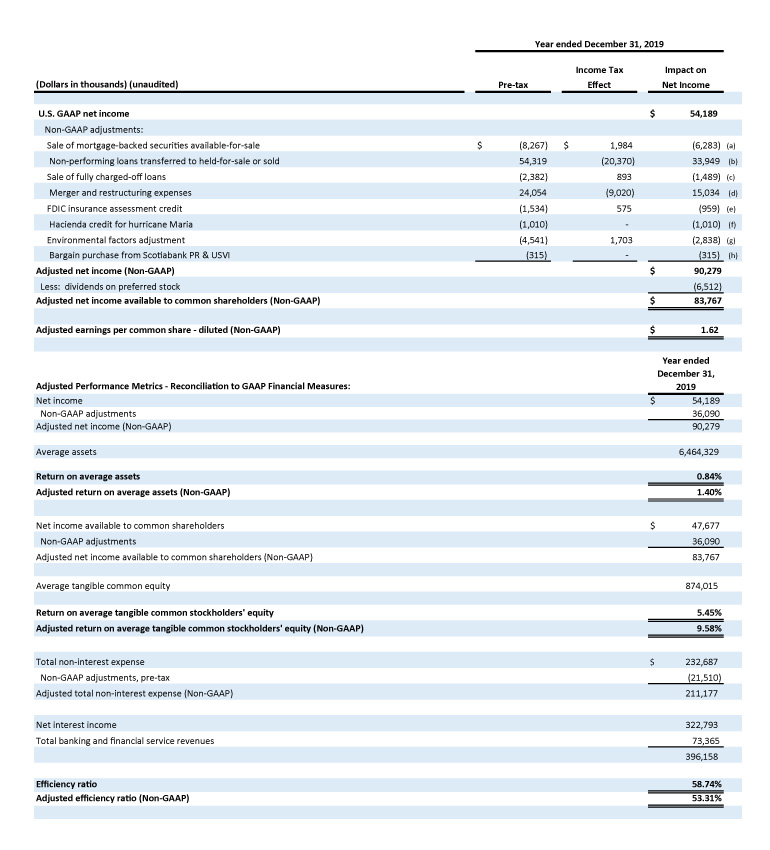 The determination of fair value may necessitate the use of one year measurement period to adequately analyze all the factors used as of the acquisition date.